The plant, which the companies say is the first of its kind, is operated by Swedish waste management company Sysav Industries AB, and sorts pre and post-consumer textile waste in southern Skåne. . 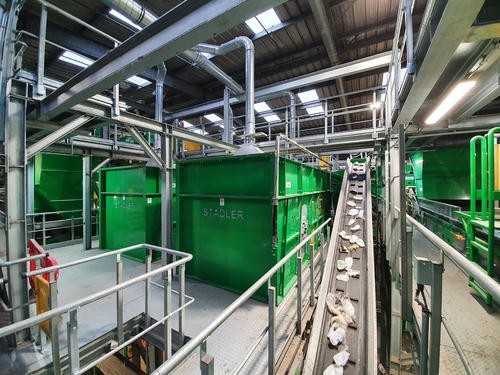 It was handed over to Sysav Industri AB in September 2020, and is currently in its initial phase of operations.

The facility receives textiles in bales, typically weighing 350 to 500 kg, and has the capacity to process 4.5 tonnes an hour.

Post-consumer waste is made up of clothing and household textiles, which includes unsorted material collected separately from household waste and recycling centers (HWRCs), and manually pre-sorted industrial waste.

The automated machine can then sort the textiles into various types of fibers, a process that is normally done by hand.

According to the two companies, the result of sorting by hand “doesn’t meet the requirements of recycling companies and the fashion industry”, meaning the majority of textiles cannot be reused in this industry.

They added: “As a result, only a small quantity of discarded textiles is recycled and the potential for increasing it is enormous. The SIPTex project is exploring how to achieve the required quality through automation.”

The plant was designed by Stadler in “close cooperation” with Tomra, which supplied the equipment.

Stadler international sales manager Urban Kozinc said: “The main challenge was that automated textile sorting had never been done before. Working on this pilot plant we have understood that the feeding system is very important, that the hoppers and chutes need a special design because of the size of the textile material, and that the conveyors needed special belts.”

The plant is part of the Swedish Innovation Platform for Textile Sorting (SIPTex), which is a government-funded project aimed at developing a sorting solution tailored to textile recyclers.

It is the “third phase” of the SIPTex project, which follows an initial study, and the construction of a small pilot plant in Avesta.  In this second phase, the project collected 700 tonnes of used textiles from recycling centers. Following a manual pre-sorting of reusable textiles, the waste material was fed into the Avesta pilot plant.

This comes as the Dutch firm Fibresort is also rolling out its automated textile recycling machine which it says can sort recycled textiles into 14 separate fibre types at a rate that is claimed to be six times faster than a human can achieve (see letsrecycle.com story).