Garment workers in the U.S. have long rallied against a wage system that they say effectively keeps them earning below minimum wage. 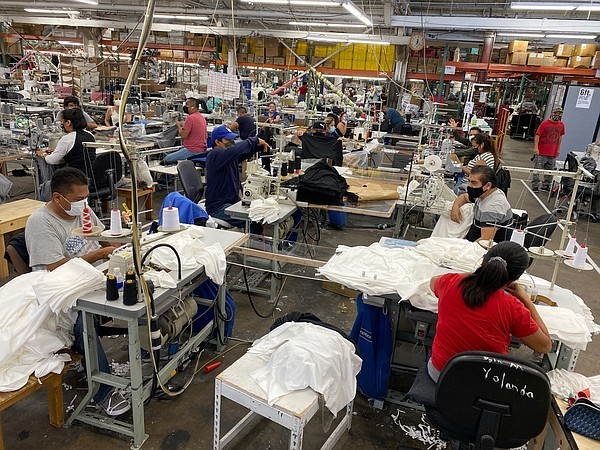 But during the ongoing COVID-19 pandemic, which has drawn renewed attention to the wages and working conditions of low wage workers, they have mobilized to push for an end to the so-called &quot;piece rate&quot; system. The system is essentially a model of wage calculation that pays garment workers for each item produced, rather than an hourly wage as set by federal and state minimum wage laws.

The federal Fair Labor Standards Act and state wage laws generally set the floor for minimum hourly wages for most regular employees, but worker advocacy groups have increasingly raised attention to categories of workers including independent contractors, agricultural workers, and garment workers, who can be paid under different schemes.

“We are the hub for domestic manufacturing in the United States, and when the [COVID-19] crisis first began, our garment workers were the ones that quickly mobilized to make PPE, gowns, and masks for private and for public use,” said Nayantara Banerjee, industry researcher at the worker rights group Garment Worker Center, at the Fairchild Media Group Sustainability Summit this month.

“In the meantime, garment workers have been experiencing wage theft, and working in poor conditions in L.A.’s entrenched sweatshop culture,” she said.

The Garment Worker Center is one of the supporters of the California bill, The Garment Worker Protection Act, or SB 62, which would end the piece rate pay framework for workers in the industry. The measure, authored by California Sen. María Elena Durazo, is working its way through the California legislature. Banerjee also attributed the momentum around the measure to organizing efforts by garment workers who have mobilized for better working conditions.

Some experts observing the measure, whose predecessor bills had stalled, view the COVID-19 pandemic and its widely reported impact on low wage workers, as a potential catalyst for such structural wage reforms.

“Given the confluence of a greater attention on the supply chain and the garment industry, both in the U.S. and abroad, and the attention to workers’ rights within the pandemic, I think the act has strong possibilities of passing,” said Chaumtoli Huq, associate professor of law at the CUNY School of Law, who focuses on labor and human rights issues. Huq was not a panelist at the summit, and commented generally on the U.S. garment industry’s wage framework.

“I should say that it should pass,” she said. “In 2021, we shouldn’t have categories of workers who are not guaranteed a livable wage.”

Efforts to address the fashion industry at the federal level are still unfolding. A proposal by some fashion brands and nonprofits, calling for President Joe Biden to appoint a so-called “Fashion Czar,” a policy expert who would advise the administration on oversight of the fashion industry, continues to generate debate in the industry.

At WWD’s Sustainability Summit, Lauren Fay, founder of the nonprofit group The New Fashion Initiative, made a case for the creation of such a role.

“‘Czar’ is a title and a position that’s been created in moments of acute need throughout U.S. history,” said Fay. “And they have a certain purview and specific oversight into different parts of U.S. legislation, working with different parts of the government.”

“I think it’s a great idea,&quot; she said. &quot;I think there’s a lot of people in the administration, and certainly the appointments that Biden has made, have brought a lot of different people to the table, a lot of different voices, which are, incredibly important, I think, to making true progress.&quot;

Across the Atlantic, the fashion industry in the United Kingdom is also still contending with the ongoing impact of Brexit, through which the U.K. officially broke away from the European Union after a referendum vote. Many of the formal changes of Brexit went into effect this year.

“The issues around identity have been prevalent around what this means for the U.K. going forward,” said Tamara Cincik, chief executive officer and founder of the Fashion Roundtable, at the Sustainability Summit.

“It’s been a very difficult time for the sector — the sector in the U.K. was very heavily slanted toward ‘remain,’” she said, referring to the voting parlance around remaining in the EU.

“From a business perspective, it’s been incredibly challenging for a lot of brands in terms of delivery, delay, red-tape, added costs,” she said. “And it’s equally been challenging for our EU partners. So there’s been a lot of short-term consequences, and I really hope they’re short-term, and I really hope the EU and the U.K. can get around the table and sort those issues out.”