Synthetic dyes are common ingredients in the textile industry, but because of their general use, they often find their way into water bodies from industrial wastewater, where they pollute the water and threaten water security. 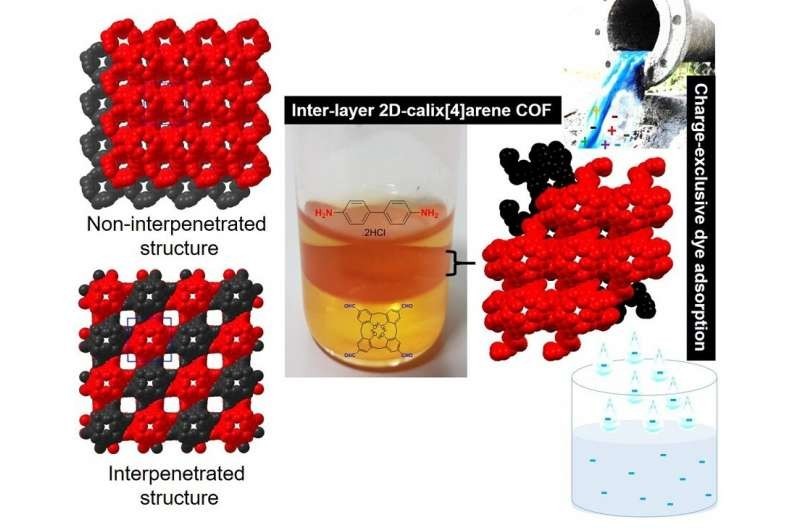 Removing these polluting dyes can be achieved through adsorption, where the dyes are collected in the pores of highly porous materials that scoop the pollutants from water and trap them in the pores.

Dr. Shetty has developed a novel structure using calixarenes to remove dyes selectively and efficiently from wastewater. Their work was recently published in the Journal of the American Chemical Society and appeared as a cover article.

"Calixarene molecules have been extensively exploited as versatile supramolecular building blocks," explained Dr. Shetty. "This is due to their ability to adopt different conformations, which refers to the spatial arrangement of atoms in a molecule, and the relative ease with which they can be functionalized, which refers to how easily a calixarene can take on new functions, features, capabilities, or properties by changing its surface chemistry."

This is particularly true of calix[4]arenes where the ring consists of four aromatic rings. Calixarenes work as excellent adsorbers, but in the monomer form, they can be dissolved in some solvents, which would hinder their practical use.

In a macroscopic architecture, however, calixarenes become insoluble in almost every solvent, especially in water.

To create calixarenes with a macroscopic architecture, Dr. Shetty and his team turned to covalent organic frameworks, or COFs. COFs are a class of materials that form two- or three-dimensional structures through reactions between their organic components, resulting in strong, covalent bonds that create porous, crystalline materials.

"COFs have proven to be an important class of porous materials on account of their well-defined structures, tuneable pore functionality, and good chemical stability," explained Dr. Shetty.

Giving calixarenes a macroscopic architecture is very challenging but if successful could allow them to be incorporated into practical platforms such as powders in cartridges or membranes.

While few researchers have attempted to build COFs with multiple ringed, or macrocyclic molecules, like calixarenes, Dr. Shetty's team realized that a calixarene-based COF would be an ideal way to remove toxic dyes from industrial wastewater.

Dr. Shetty, along with the Trabolsi research group at NYUAD, developed the first woven structures of calixarene-based COFs, making a 2D network that can be delicately tuned for each application. They joined calix[4]arenes by creating covalent bonds between the organic molecules to link them together, then these calixarene chains were interwoven by slotting one calixarene into the bowl-shape of another, effectively stacking the chains.

The synthesized COFs showed well-defined lattice structures, indicating a highly crystalline nature for both COFs, with plenty of pores for adsorption applications. By varying the concentration of calixarene units in the solution, the stacking orientation in the COFs can be altered, meaning researchers can create both interpenetrated (meaning catenated) and non-interpenetrated frameworks. The resulting COFs featured wavy layers containing the calixarene cavities, making them attractive candidates for adsorbing small molecules.

The researchers validated the material's ability by using them for selective removal of cationic-dyes from aqueous mixtures.

Importantly, creating a structure with organized pores increases the number of molecular interactions between pollutant molecules and adsorbent. Interestingly, the COFs developed by the research team were exceptionally selective for the cationic dyes in the test mixtures without depending on the size of the molecules. The COFs also demonstrated a highly negative surface charge, allowing charge-selective removal of the dye molecules.

"With the inherently hydrophobic cavity, anionic surface, and possibility to develop these COFs in a membrane, our work has the potential to bring calixarene chemistry to an exciting materials science horizon," said Dr. Shetty.