
write for us Contact
Copyright © 2021 TexCovery. All rights reserved.

An Awesome Bricks Are Made from Textile Waste - Textile Sustainability Trends

An Awesome Bricks Are Made from Textile Waste - Textile Sustainability Trends

The basic component of the bricks is shredded clothing, which Merlet purchases pre-ground from a supplier in Normandy. Each brick uses the equivalent of two to three T-shirts' worth of material and, as a FabBRICK representative told Treehugger, any kind can be used – "not just cotton, [but also] polyester, elastane, PVC, etc." 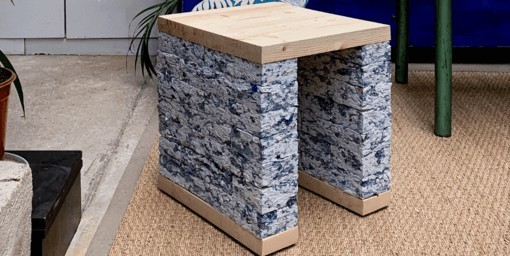 The scraps are mixed with an ecological glue that Merlet developed herself, then pressed into a brick mold. This mold uses mechanical compression to form the bricks, so it requires no energy beyond what a human worker needs to press it down. The wet bricks are removed from the mold and set out to dry for two weeks before use.

When it comes to construction, the bricks cannot be used for structural work, but Merlet said she's working on that and hopes they can be at some point. For now, they are fire- and moisture-resistant, and make an excellent thermal and acoustic insulator. They're suitable for room partitions and decorative walls in retail stores (particularly fitting where clothes are sold). The bricks, which can be ordered in four different sizes, are used to make furniture such as lamps, tables, stools, and more.

Clarisse Merlet was a French architecture student in 2017 when she became alarmed about the amount of textile waste created each year. In France, it's estimated to be around 4 million tons, and that's just a fraction of what gets tossed globally; it was 17 million tons in the United States three years ago. Very little of that discarded clothing is collected for reuse or recycling – less than a third in France, and half of that (15%) in the U.S.

At the same time, Merlet was aware of diminishing natural resources and the tremendous waste inherent in the construction industry. Surely there was a better way to build that reduced demand for virgin material and make use of resources that have already been extracted? That's how she came up with the idea for FabBRICK, her award-winning company that makes decorative and insulative bricks out of old clothes.

From the company's website: "Since our creation at the end of 2018, we have already designed more than 40,000 bricks which represent 12 tons of recycled textiles." FabBRICK does commissions for retailers and companies that want specialized bricks, such as the famous Parisian shopping center Galeries Lafayette that has ordered a handmade series, and Vinci Construction that's turning its own worksite wear into stools and lamps. The process appeals to many companies because, as explained to Treehugger, FabBRICK "can personalize the color of your wall with the clothes you decide to recycle."

In an interview with Novethic, Merlet shows a prototype of a brick made from shredded surgical masks – an interesting potential use for some of the pandemic-related waste we now see worldwide. She says, "We don't yet know how we're going to sell it, because it still has to pass a number of laboratory tests, notably fire tests," but the idea is to build some small furniture pieces and see how they work.

The company is still small and fairly new, but the idea is exciting. With such a surplus of clothing in the world, it makes perfect sense to use all that cotton, wool, polyester, and more in ways that prolong their life and replace other materials that would have to be extracted from the Earth. Merlet is on to something great here, and hopefully continues to get enthusiastic support for her work from companies around the world.